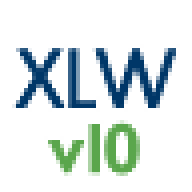 This functionality was added in ExcelWriter 8.5 and is only available for XLSX or XLSM workbooks.

In Excel, worksheet names have the following restrictions:

If the value bound to a data marker in a worksheet tab does not comply with the above restrictions, ExcelWriter will take one of the following actions in order to generate a valid worksheet name in Excel:

If there is already a worksheet with the same name in the workbook, a unique number in parentheses will be appended to the end, just as Excel does. For example, for an existing sheet name "Sales", the value will become "Sales (2)". If there are more tabs that are bound to the same value, the number in the suffix will be incremented as such "Sales (3)", "Sales (4)" and so on.

Value is an empty string

If the value in the data source is an empty string, then the data marker will be replaced with the string "_BLANK".

If ExcelWriter would normally throw an exception because there is no matching data source, an exception will still be thrown if the data marker is in a tab name.

Value is an unsupported data type for data markers

If the data type of the value in the data source is an unsupport type for data markers, the data marker will be populated with a custom string:

In the case there was already a worksheet with the same name, then a suffix of form " 2" (space + a number starting from 2, with no parenthesis) will be appended to it. For example, "<InvalidType-BINARY> 2".