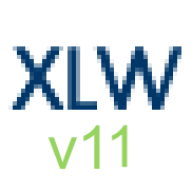 Preprocessing refers to using the ExcelApplication object to modify an existing partial template file before passing the template file to ExcelTemplate for importing data.

Postprocessing refers to using the ExcelApplication object to modify a workbook that has already been populated with data.

For example, you can create a Workbook with ExcelApplication and insert the formatting, charts, or dynamic content that you want to appear in the final workbook, along with data markers where you want the data to appear. You can then open this Workbook with ExcelTemplate to populate the data.

When should I be postprocessing?

Postprocessing should only be done when there are changes that need to be made based on the data that was imported, or when preprocessing is not available.

An example of when preprocessing is not available is combining multiple existing files into a single workbook. This is common when using OfficeWriter for Reporting Services because the only way to access the reports with ExcelApplication is after they have already been rendered with Reporting Services and are full of imported data.

In general, it's best to avoid post-processing as a report with all of its imported data can be much larger than the original template file. This means that ExcelApplication may consume a much larger amount of memory compared to the same operation performed on the original template. There is more information on how to reduce memory usage in Best Practices with Large Reports.